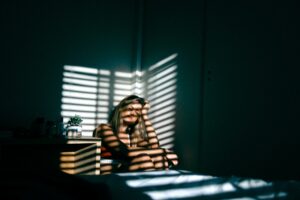 Many of the sex therapy clients I work with report feelings of shame in relation to sex. In some cases, the shame is linked to a religious upbringing. Although the message to wait until marriage for sex does not have to be a negative one, for many people this message is conveyed in a way that implies that sex is wrong or dirty. Some people from non-religious households grow up with similar messages about sex, often communicated in an attempt to avoid teen pregnancy but resulting in the message that the individual should not have sex or even want to have sex. And for some, the idea that sex is shameful is conveyed by the lack of discussion about it growing up, suggesting that sex is taboo.

For women, sexual shame is sometimes linked to a double standard, a separate set of rules that apply to women but not to men. For example, rules about the appropriate number of partners one should have, whether or not casual sex is acceptable, whether or not it is okay, or even if one should enjoy sex– some women have gotten the message that “nice girls” shouldn’t want to have sex at all. In some cases, women perceive that these double standards aren’t right, but find it difficult to break free from their impact. And in other cases women believe the double standard, thereby adding to their feelings of shame.

Many of the clients I see realize that shame is getting in their way, preventing enjoyment or their full participation as a sexual being. Sexual shame can make it difficult to communicate with your partner, to express what you like and don’t like, or even to know your preferences in the first place. Sexual dysfunctions such as erectile dysfunction, premature ejaculation, inability to orgasm, sexual pain, and low libido can all be related to sexual shame.

Shame about sex and sexuality is difficult to overcome, but sex therapy can help. Therapy to address sexual shame may include an overall exploration of compassion for the self. Messages about the meaning of sex and the context in which it should happen are also an important part of addressing shame. Therapy should be tailored to the particular characteristics of each individual, allowing them to develop their own sexual expression that is consistent with their values.

More from the Blog

What is anxiety? Anxiety refers to worry, fear, or the sense that something bad may happen. Anxiety isn’t always negative. It can serve as a warning system, calling our attention to danger. Anxiety may help ...
View Post

Vulvodynia—It’s Not in Her Head

The other day I was watching TV and a striking ad came on that made me sit up and take notice. Featuring dramatic music and numerous women with no dialogue, the ad ended with the ...
View Post

Re-building Your Relationship After Kids

While many of the couples I work with talk about the challenges of maintaining a close emotional relationship over time, couples with children often seem to have the biggest challenge in this regard. Research supports ...
View Post
Scroll Up