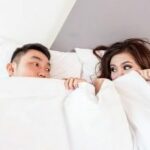 The last blog entry I wrote was about the topic of communication in relationships, which came up during a talk I gave for a local group of mothers. The other theme that came up at this talk was sex. Half of the questions the women had were about how to get the spark back, what to do when you’re too tired to have sex, and how much sex is normal to have when you’re married with kids.

As a relationship and sex therapist, the question of how often couples should have sex is one I hear often. In our society where couples on television seem to manage steamy sex even after a long work week and women’s magazines bombard us with sex tips to keep him interested, we get the message that in order to have a good relationship couples should be having sex multiple times per week using multiple positions and techniques. Yet in my work I’ve seen that how often a couple has sex is not the most important factor in a satisfying relationship.

Sometimes the frequency of sex declines due to a busy life stage, such as in the case of new parents. Even though both partners may wish they were having sex more often, it simply may not be realistic to do so at certain times. Give yourself a break and recognize that there is a lot going on; it’s okay to let sex slide for a while. Stay connected in other ways, and when things slow down a bit you can bring more frequent sex back.

In other cases the reduction in frequency of sex isn’t related to a particularly busy time, but rather to the fact that once the new relationship hormones have waned neither partner has a very high sex drive. If this is the case for you, you can find other ways to feel connected and close.

More from the Blog

Many of the sex therapy clients I work with report feelings of shame in relation to sex. In some cases, the shame is linked to a religious upbringing. Although the message to wait until marriage ...
View Post

It’s that time of year, when folks are making resolutions. This is despite the fact that research shows that the vast majority of people will relapse into their old behaviour within a few months. It’s ...
View Post

Vulvodynia—It’s Not in Her Head

The other day I was watching TV and a striking ad came on that made me sit up and take notice. Featuring dramatic music and numerous women with no dialogue, the ad ended with the ...
View Post
Scroll Up